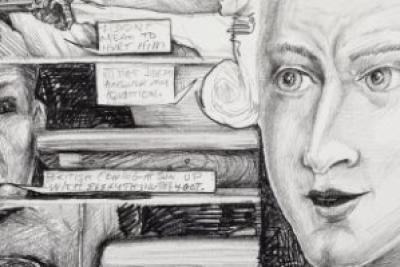 NEW YORK, NY, April 13, 2011 — Critically acclaimed artist Kenseth Armstead will present his first solo exhibition, Spook™: INVOCATION at the gallery LMAKprojects on June 23rd, 2011. He invites the viewer to join him in ambitiously inserting a Founding Father into the pantheon of heroes traditionally celebrated over the July 4th holiday.

Spook™: INVOCATION shares and celebrates the life of historical figure James Armistead Lafayette, a slave, turned spy, who provided intelligence to help end the American Revolution. Armstead specifically focuses on the year of 1781, when James was successfully working as a double agent for America’s first Director of Central Intelligence, George Washington.

After extensive historical research, Armstead re-tells the story of James Armistead Lafayette through the contemporary portal of the Graphic Novel Format. The exhibition Spook™: INVOCATION will be comprised of thirty works, hand drawn images, taken from three months in the spying life of James, from his first mission for George Washington, under the command of the Marquis Lafayette, to his dangerous compact with the most feared British General, Lord Charles Cornwallis. This re-mixed take on the story, forces the viewer to examine whether all of our history has been told. James, a lost hero, is drawn in context, for the first time, as a fully realized character.

A true multimedia artist, Armstead traded in his digital video-editing suite in favor of graphite pencils and paper for this project. Utilizing traditional drawing techniques, the works in Spook™: INVOCATION range from detailed close ups, based on historical 18th century portraiture of the main characters, to the use of the likeness of Jamie Foxx as the spy James, or large scale, rough hewn battle scenes that viscerally channel the brutality of war.

“James Armistead Lafayette is an exciting character in the American Revolution. He’s falls somewhere between James bond, an often conflicted spy, and Maximus the Gladiator, a slave who fights to preserve the lofty goals of a growing empire.” Kenseth Armstead

Opening on June 23rd, 2011 Spook™: INVOCATION will be on view through August 1st, 2011. Located in the heart of the Lower East Side, LMAKprojects, 139 Eldridge Street, is open Wednesday through Saturday from 11am till 6 pm and Sunday by appointment.

ABOUT THE ARTISTKenseth Armstead’s multimedia and installation works have been exhibited at the Brooklyn Museum; Whitney Museum of American Art; Bronx Museum; Studio Museum in Harlem and MIT. They are in numerous collections including the Centre Pompidou and African-American Museum in Dallas, Texas. Grants he has won include the Pollock-Krasner Foundation Grant, NYFA individual artist award in video, NYSCA individual artist award in film/video, the Camille Hanks Cosby Fellowship and a Creative Capital Foundation Grant in film/video. He received a BFA from the Corcoran College of Art and an MS from the Polytechnic institute of NYU.  He participated in the Skowhegan School of Painting and Sculpture and the Whitney Museum Independent Study Program.

ABOUT LMAKprojectsLMAKprojects was founded in 2005. The gallery’s interest lies in the commitment to the artist’s process and dedication to their thoughts and production, introducing collectors to new horizons through visuals, sound or concept. As a gallery they believe in open communication and developing relations between the viewer and the art. LMAKprojects is known for its exhibitions with international allure and focusing on inter-disciplinary practices. LMAKprojects presents works in all media, ranging from painting, photography, video/film and sculpture by artists from all over the world. Louky Keijsers Koning and Bart Keijsers Koning are co-owners of the gallery.